The Genius of American Idiot

Praise be to Jesus of Suburbia. Saw American Idiot on Broadway with my hubby and loved it. I’ve always been a fan of Green Day and their American Idiot album was a large part of my playlist for Chicago’s marathon in 2006. So I know every riff and word in that album.

But this musical, this musical made me think of the album in ways I hadn’t before. I love how the songs were strung together to tell a tale of American angst, anger, apathy, averageness and alienation. 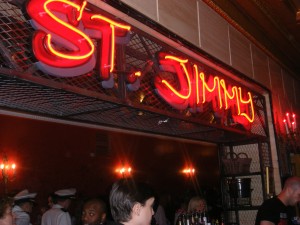 Inside the lobby next to St. Jimmy's bar in American Idiot

First, the cast was wonderful. When going to a Broadway show, you want show-stopping performances and numerous times the cast members hit notes that gave my shivers shivers. Rebecca Naomi Jones (I thought it was physically impossible for someone to be that talented), Tony Vincent (I had to read up on the boy after falling under his bad boy spell. *Of course* he was Judas in Jesus Christ Superstar.) After Alyssa Umphress finished belting, I heard someone say “wow.” A half a second later I realized that someone was me. Also, Joshua Henry’s powerfully smooth and controlled voice moved me so much I snagged him after the show to wish him a successful future. He looked honestly appreciative.

I would think that as a performer, the musical had to be special in that this album really speaks to our generation. It’s the alienation of an average generation. Though it’s undoubtedly rewarding to perform anything on Broadway and especially the classics (i.e. Bye Bye Birdie, The Sound of Music, West Side Story) This seemingly would have an asterisk by it because there’s a truthfulness here that’s only universal to this generation.

Also, the set wasn’t some over-the-top get up, but seemingly unfinished, raw like Americans, so it was perfect. Gritty with pop-culture images without being too kitschy and the clever use of television further drove home the point of “being controlled by the media.”

There’s a lot of well-heeled Broadway types who didn’t like American Idiot and it’s fine because that’s part of the genius of it all: differing opinions help make us Americans, not idiots.