‘Take on Me’ and more

Posted on May 7, 2010 | 1 comment
The whole reason my hubby and I came to New York was so that he could go to their farewell concert. Yes, you read that right. A-ha. Yes they’re still around. No, they’ve never stopped making music. They’re actually quite a big deal in Europe and have been for decades. They’re not big here largely because of differences between them and a record company. Anyway, the real a-ha has matured past the ’Take On Me’ of the ’80s (not that there’s anything wrong with that…) But I always describe them as a dark mashup of U2, ColdPlay and Keane. Good stuff.
Last night was the concert and it was amazing, great songs (The set list was wonderful, my fave is Manhattan Skyline) and we were about 5 feet from the stage. 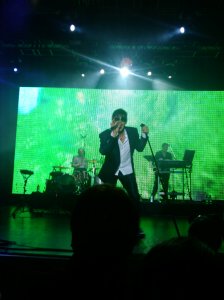 It also was so cool to meet the fans. Imagine loving this group for 25 years and finally getting to see them. We connected with a couple folks like that and just before Aha took the stage, I turned around to watch their faces. It was like watching a child get his first glimpse of the real Santa Claus. It was magic. My hubby and I saw them here in NYC in 2005 and I saw the same thing then. Women in their early 40s magically turning 15 again. No botox necessary. Think about your favorite artist that would do that to you. Mine? George Michael. I know, stop smirking.

An unexpected, yet exceedingly bright spot was Sondre Lerche. What an amazing opening act. I was suspicious at first. Though his hair had that wild and greasy Curt Kobain thing going on, which seems to be a requirement for musical genius, he looked 14 and 104 lbs soaking wet. I kid you not the guitar was bigger than he. But once he picked it up, his nimble fingers were a blur. He ravaged that guitar with upbeat folksy jaunts that plunged into guttural moans _ all in one song. He was also witty, very funny and a regular kid with a very unregular dose of talent. 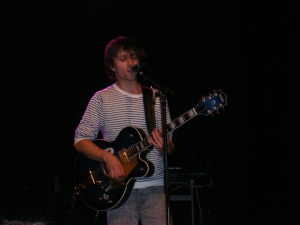 Tonight we’re going to American Idiot on Broadway… Well, if they reopen Time Square in time because there was a suspicious package, but that’s another entry for another time. Until then.